Brittany Snow began modeling at the age of three and is an American actress and singer. She began her career as Susan "Daisy" Lemay on the CBS series Guiding Light (1998–2002). She then played the protagonist Meg Pryor on the NBC series American Dreams (2002) for which she was nominated for a Young Artist Award and three Teen Choice Awards. 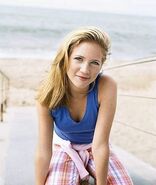 Add a photo to this gallery
Retrieved from "https://americandreams.fandom.com/wiki/Brittany_Snow?oldid=6037"
Community content is available under CC-BY-SA unless otherwise noted.